The logic of capitalism presents the production of goods and services as aiming the satisfaction of Humanity’s needs, extracting from this activity a surplus for investment in the increase or improvement of its productive capabilities; that is a lie, presented in the economy schools’ textbooks. That logic is not the satisfaction of the needs of Humanity; if that were true, the billions of needy people in essential areas such as ​​food, health, housing, education, and others – while capitalists, national governments and their regional or global bodies complain and worry about low GDP growth – would not exist.

From the previous context it follows, then, that the objective of the capitalists is the production of value, the constant and unlimited accumulation of profits, of capital, using the satisfaction of people's needs as an instrument for that purpose; and not as a goal. Basically, for capital, humanity and the planet's resources are nothing but instruments for the achievement of the aforementioned accumulation; thus, capitalists, small, big, multinationals, within the scope of their respective scales, seek to accumulate money, wealth, capital, using their businesses as their tool and the meeting of people's needs as a means to achieve that end.

In this context, capitalism, as an economic model, aims for unlimited, infinite growth. On the one hand, capitalists need to generate goods, value; and, on the other hand, they need workers to produce goods and services, all of which are forms of merchandise, of extraction and accumulation of profits. On the other hand, these goods and services have to be transformed into money through sales, thus requiring the existence of consumers (families, people), purchasing companies and States, that spend the money of the taxes subtracted from, in their vast majority, labour income.

Ludicrously, while it is sufficient for a person to eat half a chicken per day, the capitalist, for his part, will use every means so that each person consumes, not half but one whole chicken, two chickens... From a human logical viewpoint, food needs fall within limited parameters, in terms of quantity and variety; the capitalist always wants to produce more and more and that a flow for this production exists, by inducing artificial needs in consumers, a consumerist drive, if necessary by compromising future income through credit. At the same time, the capitalist wants that its workers accept a contention in their wage baselines at levels that do not lead to an increase in costs which are proportionally greater than the growth in revenue. Seeking to reach the infinite through the accumulation of capital is a logic which is intrinsically demented and predatory on people and on the planet.

It has become commonplace, in the current economish speak, the daily talk about growth (specifically, the GDP); be them the governments wishing to show off their skills, banks waiting for new customers, entrepreneurs seeking to increase sales, armies trying to occupy additional territories or buy new toys, large companies looking to buy smaller ones. Growth has become an addiction for the political classes and the business community, with evident contagion of the commoners. And yet, GDP is an incomplete, diffuse, generic measure, which covers only about 70% to 75% of the economic activity and does not measure the “value” of domestic work and care given within families, the social relevance of which is immense; that in addition to not including corruption, favour, bribes, trafficking (drugs, organs, migrants, women, wild animals...) On the other hand, it considers to be included in the GDP an “investment” in… armament!

Synthetically, the lust for infinite growth, inherent to capitalism, is measured through the nebulous GDP; and since material production requires a consumer market, which is restricted by the low growth of popular income and the limitations in access to credit, capitalism has developed, in an unprecedented way, financial speculation for the creation of value through the mechanism of the Ponzi pyramids; those have became the dominant element for the increase in GDP, making it even more diaphanous and of uncertain evolution, as was seen after 2008, with the flood of money through central banks, without any relation with the so-called “real economy” and without having to “get your hands dirty” with the placement of workers around machines, sales structures, logistics, advertising ...

Note: Data has been transformed to match the scale of the S&P 500, and is current as of December 13, 2019
https://www.visualcapitalist.com/worlds-major-stock-markets-same-scale-1990-2019/

It all works based in supercomputers, very agile in deciding what to buy or sell, even when it comes to ships loaded with fuel, cereals or oilseeds, for example, which cargo is bought already on board and resold in the context of speculative games. A few years ago, the trend to use vegetable oils to replace those of fossil origin came to cause sharp rises in cereal prices, which led to popular uprisings in poor areas of the globe, such as Africa[1].

In addition to the new “financial products” that keep being created, the pressure for higher consumption of goods and services is made through the induction of fashion and the deification of novelty, which turns buying and consuming into real addictions. The dynamic of capital is very strong, with real or formal improvements being launched in consumer goods, with the incorporation of new features and uses into objects, betting on design and, thus, requiring a massive investment in advertising. On the other hand, the imbedding of cheaper components (including wage costs), the increase in productivity, the segmentation of production and sales across various companies (e.g. through franchises) and different parts of the planet, involves long and complex transportation networks[2]. The need to remove or suppress competition may involve an artificial reduction in the useful life of productive equipment, so that it can be replaced more quickly by new, or just more appealing, more fashionable, models; with a subsequent increase in garbage; with, in many cases, expensive and difficult recycling, itself also inserted in long logistical chains.

This long, frequent, and diversified destruction of goods and equipment, made obsolete, outdated, physically or commercially, requires a constant application of new capital in investments and applications where the profit is higher per unit of time and per unit of invested capital.

All the elements described are the life of capitalism, they frame the existing competition between production sectors, between countries and geographic areas, between economic or financial groups, between political classes; all of them are included in a chain that, despite being an arena for fierce disputes over primacy, has in common the essential production of goods, their injection into the market, having as the desired effect the accumulation of capital. 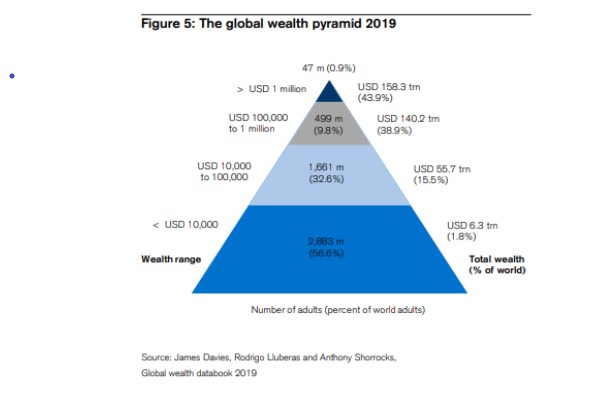 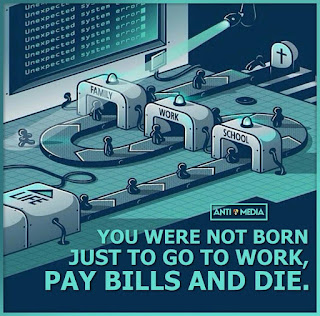 ·         In order to render slim any possibility of revolt, capitalism has been developing the State’s apparatuses to a level of complexity and resources unparalleled with the pre-capitalist proto-state, which confused itself with the private property of a king or emperor[6]. The capitalist state, in the early stages of its development, had an administrative apparatus and another, a repressive one, both of which were fragile enough so that a popular revolt or a coup d'état could effect changes in power. Today, taking into account the extension of the administrative apparatus and the information circuits, there is a very strong connection between the political class and the economic circles, which, in the European case, work in an integrated and tendentiously uniform manner. This European cooperation (and in the area of NATO) can also be seen in the realm of the armed forces, disconnected from interventions in domestic politics, especially through pronouncements as in the past; even at their base, they are made up of contracted elements rather than part of a mandatory military service, obsolete in the face of modern weaponry. As for the various police forces, they are highly armed and trained to juggle popular demonstrations with adequate brutality, as was recently seen in the case of the yellow jackets. And one should not forget the role of private security guards, their connections with the police or as contractors in supporting actions for the armed forces to carry out “dirty war” actions.
·         In the market democracy’s political models, the economic oligarchies, the patronage that “counts”, that is, the powerful interests of multinationals or of the financial system, do not organize coups d'état… just because it is not necessary; the putsches are reserved for neo-colonial scenarios where tribal or racial antagonisms coexist with an army that provides a precarious way of earning a salary and from which emanate, frequently, "heads of state" corrupted by mining companies or emporiums of extensive and predatory.
·         In market democracies there is a suit of parties among which some, very few, are the main recipients and beneficiaries of legislative orders, subsidies, or ready-to-sign contracts, emanating from large local or global economic groups. As there are no free lunches, these great economic interests discreetly finance the parties and place in their staff people from those parties, well paid and acting as links to the traffic of influences. The people, lulled by elections, fraudulent in their own configuration and, ignoring the above mentioned collusion, will remain meek, accepting and paying the bill of a decrepit capitalism linked to the state machine. 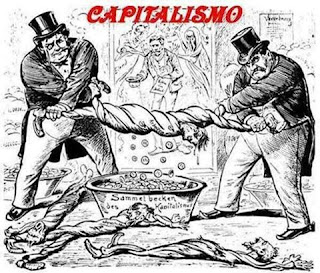 ·         Regularly, those who work will pay taxes on the consumption of goods or services, on income or property, so that the State can function as the guarantor of the controlling company, maintain the competitiveness of the economy or, more precisely, maintaining the political class and the capitalists connected to it, united in the suction of the “pork barrel"
·         The acceptance by the crowd, with a high degree of passivity, with resignation, of the state and corporate oligarchies’ power has a very old origin in the creation of hierarchies anchored in the power of weapons and/or in connections with the divine. For one or both of these reasons, obedience to hierarchies became commonplace, as well as considering as being of the proper nature of things the existence of small groups of people who give orders to the rest of the community. The acceptance by the working classes of the population of this permanent and renewed structural coercion is extended and deepened, in an overwhelming way, with capitalism, within which the coercive apparatus of the State can reach almost half of the wealth created, measured by the famous GDP. 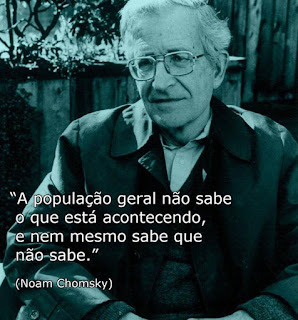 “The population, in general, does not know what is going on, and does not even know that it does not know.” (Noam Chomsky)

This and other texts at:
http://grazia-tanta.blogspot.com/

[1] Some years ago, in 1973, following the war between Arabs and Zionists, a Portuguese company operating in the area of transportation of fuels and oil crude saw the price of the cargo of one of its large ships rise in an astronomical manner which, in that year, caused it to have a fabulous profit.