Speculative electricity prices in the EU

2 – The tax puncture widens the inequalities inserted in the prices

Eurostat publishes, for EU countries, data on electricity consumption costs, using as a standard consumption in the range 2500/5000 kWh per year. Generally, a comparison between the situations for the EU as a whole in the second half of 2016 and in the first half of 2021. In this context, there is an average increase of of €5.3 during that period, per 1000kwh; that is, the change from €127.6 in 2016 to €132.9 in 2021. Below we will address not only the variations in the period referred to, but also the changes introduced by fees and taxes in the price levels of electricity available, in each country of the EU. And, finally, to observe the result between the evolution of the price of energy and the average salary.

In the following chart, the national values for the consumption of 1000 kWh can be observed, without considering the taxes and fees that the States, in general, heavily impose and perpetuate, since energy is something irreplaceable to whose consumption, no one can escape[1] The domestic acquisition of solar energy capture panels, for example - not being viable the taxation of this capture - does not escape the imposition of a VAT rate of 23% by the Portuguese government gangs, the components of the PS/PSD mafia[2].

Following are some conclusions drawn from reading the above graph.

·       Ireland has the highest energy prices (less taxes and fees) and one of the biggest increases in the period. In the immediate place, Belgium and Spain follow; in the latter case, only in 2016;

·       On the other hand, in Portugal, the PS government maintains the maximum VAT rate (23%) decreed by the sister party, the PSD, by order of the troika, about ten years ago; in this context, excluding taxes and fees, values of €100/121 are attributed to energy in the period under analysis for the five-year period observed.

·       Among the richest countries of the Union are most of the highest values (above €125) and increasing during the period – Germany, Ireland, Italy, Luxembourg, Netherlands, Austria; in addition to the Czech Republic, Greece, and France, they surpassed this mark only in 2021.

·       The cases of price decrease, in 2021 and compared to 2016, are situated in; Greece, Spain, Croatia, Cyprus, Latvia, Hungary, Malta, Poland, Portugal, Slovakia, and Sweden. Excluding the case of Spain, already mentioned, these are essentially Eastern European countries, in addition to Portugal and Sweden.

Let us then observe the prices for 1000 kWh, in 2016 and 2021, but now, considering the effects of the intervention of state leeches and, more specifically, of their parasitic political classes that find, in this essential good – electric energy – an instrument of suction of proceeds from the crowd; without forgetting the financial support and special prerogatives that States grant to operators in the energy sector. 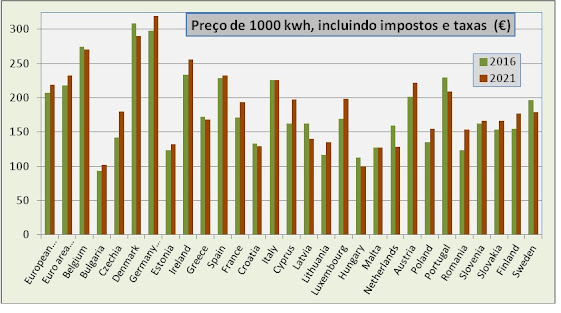 It is easy to see that the highest prices occur particularly in the richest countries, almost all of which exceed €150 per 1000 kWh; and conversely, where income levels are lower, energy prices are also lower. There is, however, one notable exception, that of a country in southwestern Europe called Portugal, where energy prices exceed those of countries as rich as the Netherlands, Luxembourg, France, Finland, and, Sweden; compared to other lower income countries, the price of electricity in Portugal is higher by around €100/150 per 1000 kWh[3].

2 – The tax puncture widens the inequalities inserted in the prices

Let us take a closer look at the base prices of energy, which are much more disparate when they incorporate the high charges with fees and taxes applied by States and their respective political classes; generally raising the price of energy to be paid by peoples, as can be seen in the following charts, for 2016 and 2021.

In 2016, it is quite clear that electricity prices in Denmark, Germany and, Belgium are the most expensive in the EU – €308, €298 and €275 respectively; the first two countries are the only ones that incorporate fees and taxes as the dominant shares in the total electricity price; a reality that is also evident in 2021. In addition to the two countries mentioned, it should be noted that Portugal appears as the country with the highest share of taxes and fees in the price of energy, in 2016 (47.3%) as in 2021 (45.9%); surpassed by a small margin by Spain (41.5%) in the current year.

Also in 2016, the price of energy appears to be the lowest in Bulgaria (€93.8), followed by Lithuania, Hungary, and Romania. As for the relevance of fees and taxes, their absolute value is particularly low in the Eastern countries, with emphasis on Bulgaria and Hungary; in addition to the case of Malta where the share of fees and taxes is only €6.1, for an overall price of €127.4. 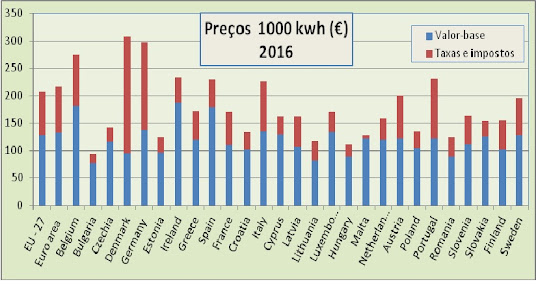 In the first half of 2021, the highest electricity prices belong to the same countries referenced for 2016; but this time with the highest value in Germany - €319, followed by Denmark €290 and Belgium with €270. The first two present the only situations in which the share of taxes and fees exceeds the level of energy production, of itself. As for the greater weight of the tax burden and similar in the overall value, Denmark and Germany stand out, with 64% and 51%, respectively, followed by Portugal (45.9%) and Spain (41.5%). 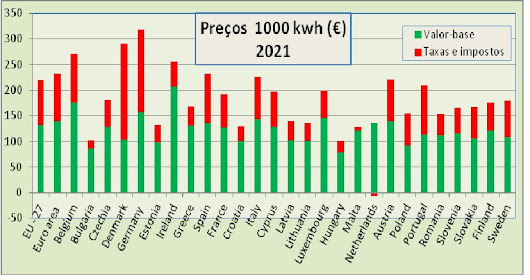 Comparing the situation in 2021 with that observed five years earlier shows different realities. In the case of the base value of production, without considering taxes and fees, are recorded the following:

In the chapter on changes in taxes and fees included in the fine prices of energy and, decided by the state apparatus, it is worth noting:

In summary, the arithmetic means,

From this it can be deduced that there is a value of around €60 for every 1000 kWh subtracted from the populations by state bureaucracies and their adjacent political classes.

The following graph shows the comparison for a very approximate time-lapse (2016/1st half/2021) between electricity prices and 2016/2020 and average wages in EU countries.

The graph shows the countries where the wage evolution had a higher growth rate than electricity prices (16) and the remaining countries (11), where electricity prices had a higher growth rate than average wages. However, it is important to consider that the percentage changes in energy prices may be close to those registered for remuneration, without it being possible to conclude that, in absolute values, they correspond to similar realities. For example, in the case of Germany, energy prices between the two years considered were €298 and €319 respectively, per 1000 kWh (+7.2%) while average earnings, in the same period, increased by 6.3% (€2387).

The situations in which the rate of increase in the price of energy exceeds that observed for remunerations are 8 countries; among which only two – Czech Republic and Cyprus – are not among the richest. The 14 countries where it was preferred not to burden wages with proportionally higher increases for energy are essentially those that the poorest, even if accompanied by others, much richer - Belgium, Denmark, the Netherlands, and Sweden. Between the two positions – Slovenia, Spain, Italy, and Poland.

[1] Except for those who live in marginal neighbourhoods, especially in the so-called Third World, where clandestine pulls are common.

[2] During the troika monitoring of governance in Portugal in 2014, VAT on electricity increased from 6% to 23%. Despite the usual governmental praise about the strength of the Portuguese economy, seven years later, the tax continues to be applied at that maximum rate.

[3] Accused of crimes within the scope of EDP, the main electricity company, are the company's former directors – António Mexia, Manso Neto and a former minister of the Socialist  Party area, Manuel Pinho.

This and other texts at: 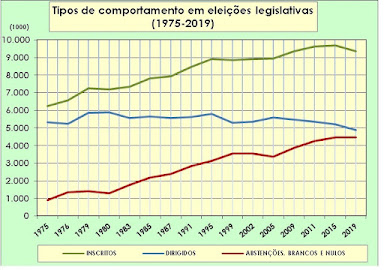 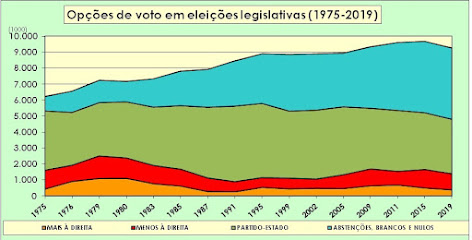 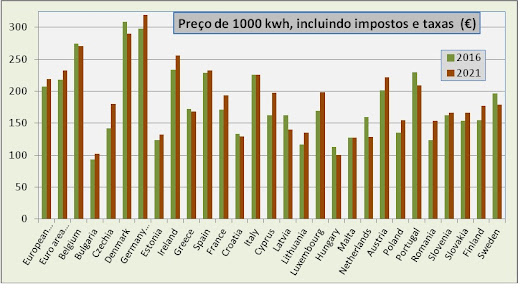 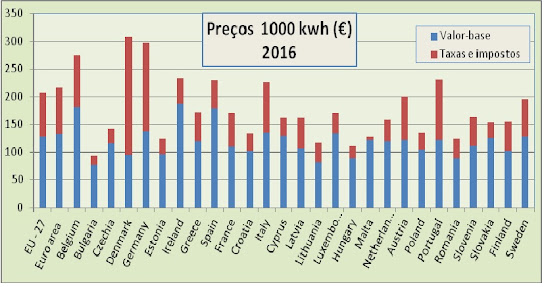 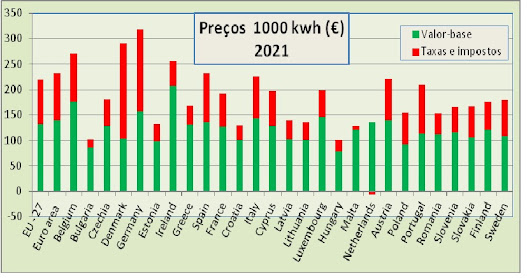